THE LAW ON FOOD WASTE : FROM COURBEVOIE TO THE ASSEMBLY

For three nights every week in the months of December and January, along with friends and volunteers in my town of Courbevoie, we recovered unsold food from the Carrefour Market Charras supermarket, for distribution to needy people, especially the middle class and the homeless.

Thanks to this experience, along with my friend Mathieu Kassovitz, who is knowledgeable about this issue, we decided to start apetition on Change.org for legislation requiring all French supermarketsdistribute their unsold food.
As of today, more than 210,000 people have signed it ! It has received more signatures than any other ‘ecological / agriculture’ petition on an online site in France.
Why create a law ?
Today in France, we have :
•          On the one hand, a middle class that has more and more economic problems. Indeed, from the 10th of each month, millions of French are out of money after paying their rent and expenses. In addition, there are more and more homeless on our streets.
•          On the other hand, every supermarket throws away more than 40 kilogrammes of food every day. This is unthinkable with the current economic crisis !
Our proposal was therefore simple and effective: to pass a law requiring or incentivising supermarkets to give – night after night – all their unsold food to the association of their choice.
Thus, with a legal framework, there would be three consequences :
1. Every citizen can create an association and file the articles (validated beforehand by the prefecture) to its town hall. This could then apply to the store of choice in its area, asking that it hand over its unsold food for distribution (as with our initiative in Courbevoie).
There will be two kinds of associations for the distribution of food : approved associations that can store items (such as the charities Secours Catholique, Secours Populaire, the Red Cross and so on) and approved corporations that cannot store food because of lack of a cold room. In this case, the organisation would immediately distribute food the same evening (as with my association, Courbevoie 3.0).
2. Each municipality may inform its citizens about this initiative. This will mobilise many volunteers, just like I did in Courbevoie (through contributions to the Courbevoie magazine and communication via Facebook, Twitter).
3. The surplus food will be automatically transferred to approved associations that can store it. This is important as, at the present moment, the Restos du Coeur [a French charity that delivers food packages and hot meals ], like other charities, is having to carry out food drives to acquire.
This proposal, which we field tested in Courbevoie, can eradicate some of the hunger in our country.
Gaining political and popular support
Many parliamentarians and elected officials, from both the right and left, support our approach, as do many celebrities such as Johnny and Laetitia Hallyday. The deputy mayor of our town, Jacques Kossowski, for instance, supported me, and I thank him warmly.
There is a real national unity around our request. We also received valuable support from the association France ONE, the NGO founded by Bono, the lead singer of U2. Indeed, our struggle is international and could be used in other continents.
We presented this initiative on 28 January and 17 February at the National Assembly. And on 5 May, we were received at the Élysée Palace, where I received the support of the President of the Republic for our petition.
Our petition was passed unanimously on Friday, 10 April in the Senate as part of the law called ‘Macron’. The Union of Democrats and Independents (UDI) Senator Nathalie Goulet inserted an amendment into the law, and the Senate voted unanimously in favour of this legal framework for the direct distribution of unsold consumables with two clarifications: this concerns supermarkets over 1,000 square metres, and they will be able to partner with the association of their choice.
The Macron law will be officially passed in late June. Moreover, the Socialist deputy Guillaume Garot has fully summarised our petition in its report. It was not easy because he was opposed to parts of our proposal, but we persuaded him thanks to our arguments, and above all, thanks to the pressure of public opinion.
In parallel with the Macron Act, a law on ‘energy transition’ is being presented for a final reading at the National Assembly. UMP MP Frédéric Lefebvre, along with others (including UDI MP Maurice Leroy), decided to seize the opportunity to insert various amendments thereto, including the same one inserted in the Macron Act.
Through this, all supermarket brands will be required to give their unsold food to the association of their choice.
The goal is to pass the provision as quickly as possible. And the ‘energy transition’ law is being passed at this very moment. It is a victory, as all the groups have agreed to vote for it.
Future steps
The aim will then be to explain the applicability of the law to the French people. I was in Saint-Maur a few days ago, and then I was at a festival in Brides les Bains (in the Rhone-Alpes region) from 5 to 7 June. This initiative, which came from my town of Courbevoie, could be applicable in all of France.
This law, for which I fought for many long months, will allow all the middle class and the poor to eat and drink without the fear of whether or not they can afford it. And we will finally see the end of scandalous images of bleach being used on unsold food to prevent its consumption.
In the coming days, we will perform the same action at the European level. In Europe, more than 100 million people live below the poverty line.
So, along with Change.org, we’re going to gather the signatures of one million European citizens, and, through the permissions of the Lisbon Treaty’s Citizens’ Initiative, call for a European directive that will require all supermarkets in Europe to pass on their unsold supplies. Brotherhood still has meaning.

by Arash Derambarsh (elected official in the city of Courbevoie), with the support of Mathieu Kassovitz (actor, director) 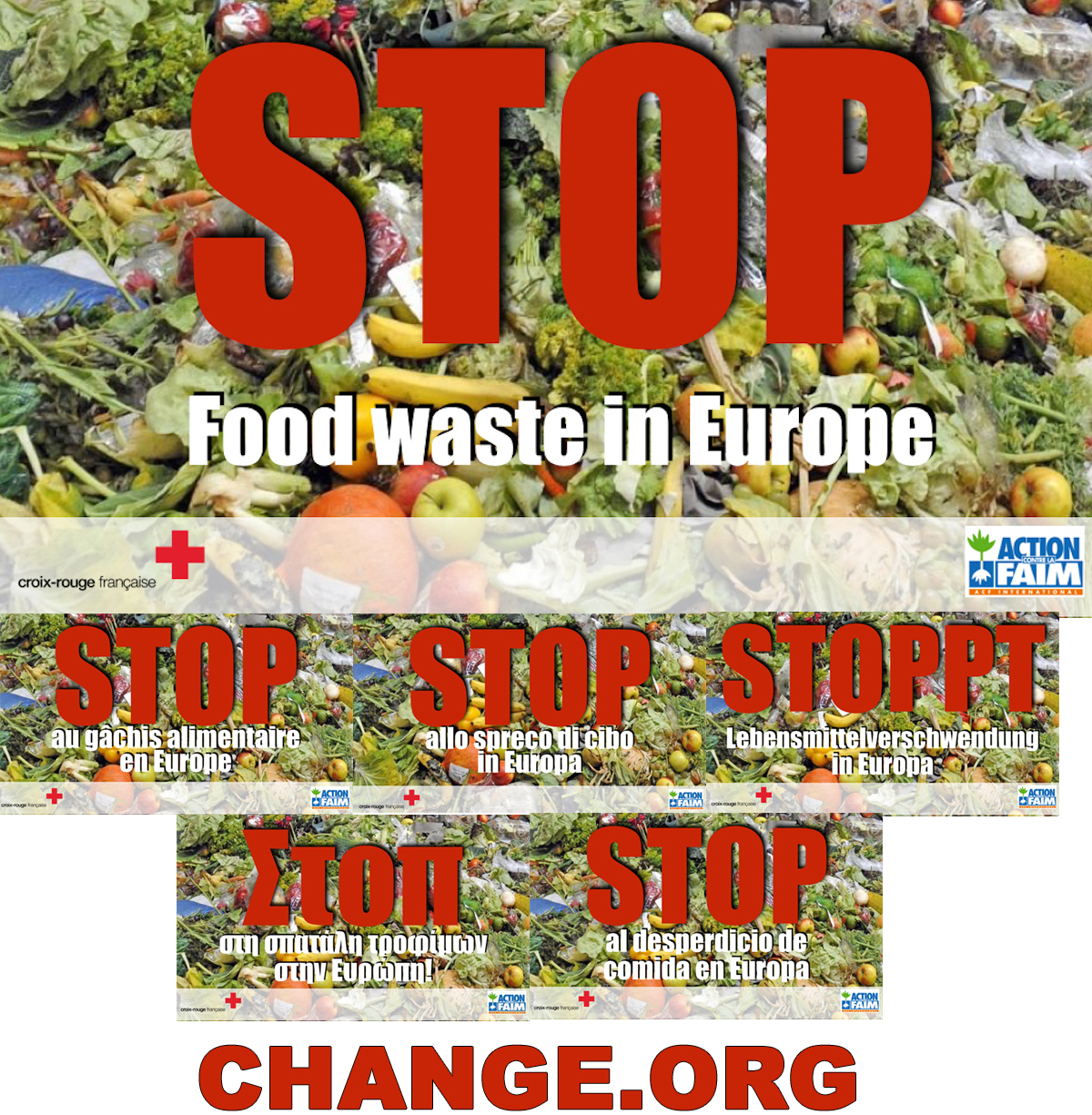